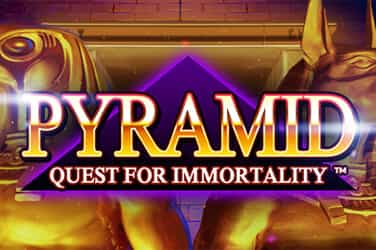 This exhilarating slot game from NetEnt is sure to bring you a thrilling casino experience. Pyramid: Quest for Immortality is set in the world of ancient Egypt and you are spinning the reels surrounded by statues of ancient gods and pharaohs. The reels are framed by the massive stone portal into one of the pyramids, with the sun god Ra on one side and the death god Anubis on the other. This framing adds an epic feel to the game and the sheer quality of the graphics tells you that you are in for something out of the ordinary.

In addition to its amazing graphics, Pyramid: Quest for Immortality also comes with rewarding gameplay. First of all, it uses an avalanche system rather than spinning reels. This means that symbols are dropped down and disappear when they form a winning combo, which in turn means that new symbols are dropped, continuing until no more wins can be formed. But not only does this mean more chances of winning, you also get a multiplier for every third successful avalanche, going all the way up to 10x! Pyramid: Quest for Immortality also comes with a system for Wilds in which symbols may turn into Wilds during certain scenarios and these stay for the next avalanche in case they are part of winning combos. Prepare for your quest into the depths of the pyramid, to find your big wins!